Woodworm are very destructive and can cause expensive damage to your woodwork. Woodworm are the larvae of the Common Furniture Beetle.

Tiny round holes, approximately 2mm across are made by emerging adult furniture beetles, and small tunnels are made by the grubs inside the wood. These small holes and tunnels are a tell-tale sign that you have an infestation. 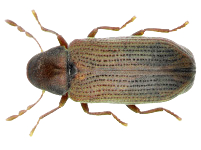 The adult Furniture Beetle is a small brown insect around 3mm to 6mm in length. The beetle will lay its eggs in rough, unpolished timber. The grubs will bore down into the wood where they develop into beetles. Approximately three years later, between the months of May and September, the tiny beetles will emerge from the timber, leaving behind those distinctive little holes.

There are several ways Woodworm can find their way into your house. The beetles can come from anywhere as they fly in through open doors and windows. The grubs can be unknowingly established when second hand furniture is introduced into the house. Serious damage can be caused to a house as the worms find their way into floor boards and structural timbers such as joists and rafters.

Wood-boring Weevils are often associated with woods suffering from wet rot. Another wood-boring beetle is the Death Watch Beetle which prefers to infest large hardwood beams.

To treat your woodworm problem quickly and discreetly get in touch

We specialise in treating timber and can provide a Timber Treatment Survey for your woodworm or dry rot problem.

Based in Billingham in County Durham we cover a 20 mile radius including the following towns: